A downloadable game for Windows

Hop into this chill and cute third person shooter and survive the many enemies that are planning to steal the energy from the Great Turtle Island!

- Right clicking will emit water from your wand, spray the ground and launch yourself, right clicking water will refill your handy water orb.

- Left clicking will blast a charge particle beam, hit enemies and zap them back to wherever they came from!

- Crystals get hot over time and need to be cooled off, when pylons get hot enemies are able to pinpoint your location, take care of them or they will get destroyed and the turtle will no longer be able to sail!

Thanks for the game!

This was a quite tragic experience for me since I kept failing to protect the pylons from exponentially growing numbers of enemies. The music and surroundings were quite serene, and the turtle's face smiled at me when I managed to look into it. I felt quite powerful with my magic rainbow lightning and water spraying rod, but this power was not enough to protect crystals from hordes of flying drones and mechanical spiders. I was also somewhat confused at why my water spray cannot cool down overheated crystals, but then I realized, by looking closely at the magnificent orange flare, surrounding them, that their heat was of some other, immaterial nature and could not be diminished with water. I kept returning to the Turtle island over and over again in the vain hope of saving it from invaders, but with each new attempt, my failure was more and more humiliating (seriously, though, even after losing the game and restarting it over again the number of enemies in each wave did not reset for me, so I think it was a bug).

The gameplay idea is very simple and effective, and the visual execution is of the highest quality! Your game reminded me of some of the older third-person action games (like Sacrifice, for example). It's definitely somewhat clunky in terms of controls and collisions, but that is to be expected from the full 3D action game made in 3 days (saying this from personal experience). But the bright and cheerful tone of the game contrasted so deeply to me with it's pressing difficulty that I couldn't help but think that this was not intended on your side.

The music and sound is nice. I love the art style. Don't let any negative comments get you down about the game play. The game has a high learning curve, but it's actually really fun. It's a push/pull game between attack and defense. My favorite abstract board game, Tzar, is set to the same theme. You have to keep moving and decide every second on whether attacking spawns or cooling pylons is better. You can't win without doing both and the challenge is finding the balance between the 2 for each round.

It took me about 3 tries to figure out what I needed to know at any given moment in order to complete the main game. For anyone feeling overwhelmed you either didn't efficiently use down time to cool your crystals and the wave is going too long (the longer the wave goes the worse the spawns get), or you didn't kill spawns at a far enough distance and they swarmed your crystal (once about 2-3 are in position to attack, just give up on that crystal and either prepare for next wave or defend a secondary one if it's a 2 crystal wave).

It's pretty addicting once you hit a rhythm. Of course I'm also a glutton for difficult tower defense games so this hit the right buttons for me. My personal requests would be some type of indicator when I'm close enough to the water to refill (you have to keep moving, and fidgeting with the water refills became difficult in late waves), spawns leaving the minimap faster after they die (I became very paranoid of things I had already killed attacking the crystal or a flier spawning I didn't catch), and some built in way to knock everything off the crystal and buy me time to recover when **** hits the fan (Finding powerups to do something like this takes too much of my attention away from defending. My suggestions are a once per game burst so you have to question if this is the wave you NEED it, have the water knock back enemies but not hurt them, or for risk/reward you can explode your water container, but can't use water for the rest of the round while it recharges/rebuilds.)

We really appreciate the positive feedback and are super happy you were able to enjoy our game! I really wish we had more time to work on a tutorial to better elaborate on these mechanics during the jam but we were very strapped for time towards the end and only got to put in very minimal details, we're happy that we were able to create something you enjoyed though. We are definitely listening to feedback and there have been talks about revisiting the game for a patch, I will definitely see if I can get some of your feedback in there to make sure the game is as good as it can be, thanks a ton for the helpful feedback and the positive outlook on things! Super happy we created something people can enjoy!

I look forward to seeing if you make any updates ^^. You guys have plans for other projects yet?

I am so glad that you figured out the way to play it. You totally nailed the design principle I had in my head for this and that's exactly what I was hoping the player would experience. The push and pull balancing act is the point.

The water explosion mechanic and the refill indicator are amazing ideas!

The cooling was such a lateral thinking move, i don't think most people intuitively figured out what it's purpose was. It's genius though. Attack/defense in real time is very hard to achieve outside an rts, and as much as i love rts games they get too complicated quick. The other way to go is multiple players with sports ball or capture the flag, but you nailed the feeling in a solo game with simple mechanics no less.

So yeah, huge fan of you guys now and I'm pretty eager to see either updates or whatever new projects you have in mind. I'd donate if you had a patreon!

Oh and if you have tabletop simulator i'd total take you on in Tzar. I've beaten all my friends so far ^^.

I really liked the visuals on this, but the game play is unfinished. The "water beam" failed to work, and there seemed to be no method of recharging it. Probably just needed more time.

We definitely could have used some more time we agree, it was a gamejam after all with limited time to make something, and we focused on having fun and our teams health most of all, so some things didn't get finished in a way we would have liked! To restore your water beam you just have to blast it at the water by holding right click and it will refill your water orb in a couple seconds!

Thanks for the feedback! To recharge the water beam right-click the ocean, we didn't have time to add it to the tutorial.

The graphics and effects look (as on screenshots) very good. Unfortunately, though, in the current state there is no gameplay: the insane hoard of enemies leaves you no chance at defense starting with wave 1 and trying to cool off pylons with water "full-time" didn't work a single time:( We agree that the game surely could have used some balance and more polish over the actual gameplay, we had a number of hiccups during the jam and barely made it across the finish line, haha! We're sorry we didn't meet expectations but with the limited time we had we definitely tried our best. Sorry!

No worries, you did well, but overlooked the main component - gameplay. I had similar issue with my Brackeys jam game, we had lots of art, but couldn't combine it in time for a nice gameplay. My lesson: ask artists to come up with very rough placeholder art and try to start on gameplay on day 1 (I only started on day 4-6 or something). I'll wait for an update of your game:)

Thanks for the feedback! We are going to adjust the balance for sure in a V1.1 patch. It is super hard right now, I only know of 1 person that has beaten it but it is possible!

I forgot to mention: visual effects, although very cool, lack "feedback". For example:

Waiting for the patch:)

Wow! For a game made in 3 days, its pretty cool. I like all the visuals and sounds.

I'm not a huge fan of the player controls (especially turning). Also, the game starts with the camera sort of looking up from under the ground layer.

Out of curiosity, what are the flying enemies in the beginning ?

We're happy you thought the game was cool, we tried our bests and made something to definitely be proud of! The game definitely has its share of bugs and like any gamejam game could have definitely used some more time rather than being rushed out the door!

Your question about the flying enemies I'm not sure I have an answer to though. We never really named our enemies or got a chance to figure out what they really were in super great depth since our team didn't have a game designer and we were rushing to get things together. Our original idea was to have the enemies be creatures from another world invading to steal energy from the pylons who would return home with it, but I'm not sure they had much more depth than that unfortunately! Hopefully that answered your question? If not I'm happy to answer it with greater details!

Yeah, I figured they were some kind of droids but they look like graduation hats sometimes ^_^

Thanks for the feedback! We never settled on the story of what they are but IMO tho are robots harvesting the crystals to take back home.

Thanks for playing, the sound effects were all hand made on a synth!

The game does not work on my PC screen, can't go pass the tutorial. :/

We're really sorry to hear that D:
Out of curiosity what is your monitors resolution/aspect ratio? 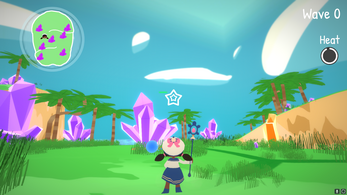 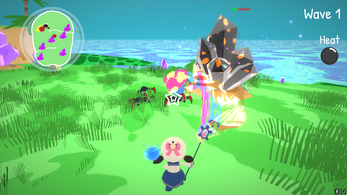 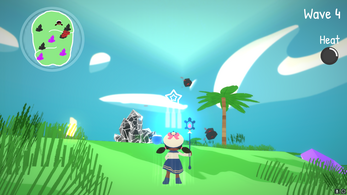 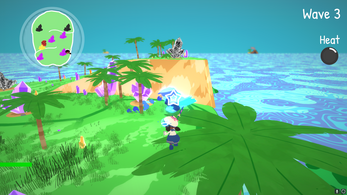 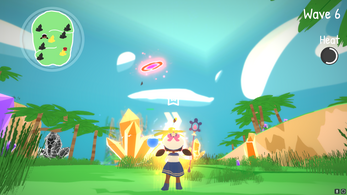